2nd February 2018
All over again for another season!
This morning's sunrise marked the last shoot day at Mornacott for another season. At last its time for the beating and picking up teams to test their skills against our birds. The sun shone all day and whilst it wasn't the best weather for shooting a fantastic day was had by all. Our traditional roast turkey dinner was followed by a very successful duck flight. A huge thank you to all of the beating and picking up team for all their efforts this season, we look forward to seeing you all in the Autumn.

Today saw the annual plucking of our Mornacott Christmas turkeys. This year our bronze turkeys have been lovingly reared along side our Ruby Red Devon Cattle. Over the summer the turkeys and cattle have shared many happy hours enjoying the Devon sunshine so we hope this will be reflected in their flavour.

The team here at Mornacott all take part in the plucking of the turkeys and take one home each for christmas lunch.

We wish you all a Merry Christmas and hope your turkeys are as tasty as ours. 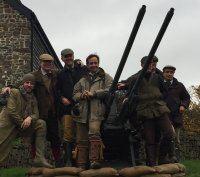 28th November 2017
Big hit with the big guns. Last Tuesday brought another shooting party to Mornacott who were keen to try a slightly bigger calibre of gun on the pheasants and partridges. Sadly, not least because it’s inert, they were unable to use our 30mm anti-aircraft gun.

Last Tuesday brought another shooting party to Mornacott who were keen to try a slightly bigger calibre of gun on the pheasants and partridges. Sadly, not least because it’s inert, they were unable to use our 30mm anti-aircraft gun.

Undeterred, the party, which comprised no fewer than six different nationalities, went on to shoot very well finishing the day with a very creditable bag and, through their generosity, raising well over £500.00 in “fines” for our chosen charities – The Soldiers’ Charity (Army Benevolent Fund) and the Royal Marines Charity.

Several months ago we arranged to have 3D photovideo tours of our cottages taken and put on our website.

Several months ago we arranged to have 3D photovideo tours of our cottages taken and put on our website.

Now with thanks to ACT studios and Cheltenham College we’ve uploaded these to our Youtube page.

Really useful for both seeing the layout and facilities available they can be seen here….. 6th October 2017
And for the really high ones we recommend...

Shooting at Mornacott has got off to a cracking start this season with our first few days having been enjoyed by all.

Several of the guns have been trying their hand at our new high bird gun which sits aside the stone bench that has always proved a popular venue for elevenses during early season partridge days.

We haven’t been able to use this rather large 30mm gun as, sadly, it’s deactivated but with a designed rate of fire of approaching 500 rounds per minute and our average shot to kill ratio 5:1, we might end up having very short shoot days. 11th September 2017
Fine Feast For Everyone.

Our annual pre-season beaters’ barbecue last weekend was, as ever, very popular with a full complement of beaters and pickers up joining us to see in the new season. A healthy mix of the old faithfuls together with several new faces served to make the event a very cheerful one despite the frequent downpours.

Given the increased numbers in the team this year we had an even bigger pig to spit-roast. The spit started turning at midnight with Andrew, Charles and Toby all taking turns to stoke the fires throughout the night!